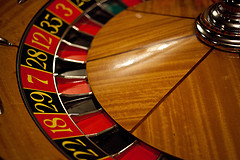 On July 16, 2009 I had the distinct pleasure to attend the Enigma show in the Adelphi Theatre in London. I happened to visit some family and friends in Europe at the time and was able to make a 1 day side trip to London to see Derren’s new show – it was worth every penny.

I have seen many great magic performers live on stage, in close-up settings or simply on TV. I saw David Copperfield fly live, have seen numerous, wonderful performances in the Magic Castle, where I am a member and enjoyed TV specials of all kind including Derren Brown’s amazing TV specials on Channel 4 in the UK (buy the DVDs on Amazon or hunt shows unavailable in the US down on YouTube until TV stations in the US come to their senses and air these feats around here).

However, being live in the theater and seeing Derren perform his self-confessed mixture of ‘magic, suggestion, psychology, misdirection and showmanship’ on stage was the high-point of my magic performance experiences so far and I have the feeling that won’t change for some time to come.

The show was nothing short of brilliant and Derren Brown is certainly a very skilled performer, with a very sharp mind and a really amazing memory (more about that later).

Just before the show began, the audience was asked to come up to the stage, write 3 things on a piece of paper and put that paper in a large bowl. Only the first 60 people who got there would be able to join and a huge flock or people rushed to get there.

The show started with his signature music used in the UK’s ‘Trick of the Mind’ show and the US ‘Mind Control with Derren Brown’ show. Derren made his quick entrance to thundering applause and delved straight into the magic.

The first thing Derren did was make use of the bowl with the 60 pieces of paper. He randomly (throw of rubber disc) selected an audience member to pick a piece of paper from the bowl and asked him to read the three words without revealing them. Derren would then discover them one by one and baffled all of us by mastering this seemingly impossible feat. He did a couple of them throughout the show – pretty cool.

One of the things that really stuck with me was the next effect. This second effect included 10 random people – Derren pretty much selected random people from the audience all night long. At the end it felt almost half of the room was on stage at one point or another – He handed these 10 participants a stack of photos taken from spectators in the foyer before the show. I think it was about 30 pictures and they had their first names written on them. The people were all in the room as they were standing up at some point and clearly not planted (he never uses stooges anyway). Derren could only have had 30 minutes with these pictures before the show and it became obvious that he did remember pretty much all names and faces and later on even seating positions of these – stunning memory skills (he is known for that). He asked the 10 people to remember one name and face each and then spread the pictures out on a table face up. Through his impressive body language reading skills he was able to determine all photos, each of the 10 participants memorized while they were attempting not give off any clues. In the final minute of this, he had the remaining people in the audience stand up and after eliminating them one by one through reading his last participant he asked them to sit back down by pointing at them and calling out their names… Steve can sit down, Paul can sit down etc. Pretty impressive!

The whole show delivered one amazing experience after the other including a longer segment similar to the ghost cabinet he included in his ‘Seance’ TV special – on stage it’s even cooler.

I will not write anything about the grand finale as Derren asked not give anything away and I will certainly respect that. I will just say that the people who left in the half-time break (yeah, some couldn’t handle it and yes, there was a 15 minute break) REALLY missed something. Derren’s ability to manipulate all our minds collectively and individually is somewhat scary but certainly amazing. He showed us all that there is no such thing as randomness on his stage. Once you enter Derren’s theatre your mind is his to play with.

Finally, I want to add a big ‘Thank You Derren Brown’ for an unforgettable evening of mystery and wonder. I had a blast.

The read more about this topic or buy products related to it, please visit Wizard Headquarters at http://www.wizardhq.com.