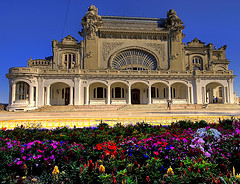 Martin Campbell directed Mel Gibson’s Edge of Darkness and two James Bond films Casino Royale and Goldeneye launches DC Comics’ Green Lantern this week. The movie begins as a renegade Guardian of the Universe falls prey to the power of fear and becomes Parallax who is voiced by actor Clancy Brown. Green Lantern Abin Sur (Temuera Morrison) imprisons Parallax on the planet Ryut located within the Lost Sector. Parallax escapes and takes revenge on Abin Sur who falls to Earth and his replacement is found within test pilot Hal Jordan (Ryan Reynolds).

The movie is very straightforward as we are introduced to the world of Oa and the Green Lantern Corps. The movie is extremely enjoyable and a loyal interpretation to the Green Lantern mythos. It also sets up the sequel as the yellow ring is forged to combat the Parallax and the after-scene credits shows Sinestro (Mark Strong) begins his journey into the Sinestro Corps. A terrific film and interpretation of the Green Lantern character that should build a long-standing movie franchise along with the current Batman and Superman characters. DC Comics begins its preview of the characters within the film with a series of comic book prequels.

Similar to the Superman Returns prequels back in 2006, the Green Lantern prequels give you a visual clue on the movie prior to the June 17, 2011 release date. The main characters of these one-shot stories include the Guardians of the Universe, Kilowog, Tomar-Re, Abin Sur, Hal Jordan, and Sinestro brought to you by Green Lantern veteran writers Geoff Johns and Peter J. Tomasi (Green Lantern Corps) as well as Green Lantern screenwriters Marc Guggenheim and Michael Green.

The main comic series brought the War of the Green Lanterns which builds on the foundations of Brightest Day as well as Green Lantern, Emerald Warriors, and Green Lantern Corps. Guy Gardner travels to the unknown sectors to discover someone with the ability of controlling Green Lanterns. Kyle Rayner and John Stewart head to Qward to rescue a fellow Green Lantern from the Weaponeer however the finale concluded with him joining the Sinestro Corps. On Earth Hal Jordan and the other various Corps leaders form the New Guardians locate the other Entities on Earth however run into Krona who has been collecting them for an unknown purpose. The New Guardians pursue Krona which leads them to the Planet Ryut in the lost sector. There they find the Book of the Black which reveals the history of Krona and future of the Green Lanterns.

Hooi Lee is the co-owner of Devil Comics Entertainment that started in 1999 and has expanded into a worldwide store that serves comic fans and collectors. We provide an inventory of comics, trade paperbacks, toys, and statues through discount pricing and quality service. Stay informed of upcoming subscription, coupons, toys and comic sales through our Devil Comics Entertainment blog.