The Effects And Perks Of Global Warming 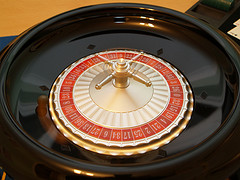 Marya Mannes once wrote, « The earth we abuse and the living things we kill will, in the end, take their revenge; for in exploiting their presence we are diminishing our future. » Obviously Ms. Mannes preferred the status quo – health, sanity, logic, blah, blah, blah. Why? Green House Roulette is so much more intriguing.

In the country, weather affects everything. For five years Western South Dakota has been gripped by drought. Water and hay are vanishing. Farms and ranches are blowing away. While the government bails out victims from hurricanes and says, ‘South Dawho?’ our cattle are pissing dust mites. Fortunately, things are looking up.

There is some good news! Those pesky glaciers are finally melting off! Last year an eight-nation report estimated an area of Arctic icepack the size of Texas and Kansas is gone. For those who are geographically impaired, that is an area bigger than a breadbox.

At first, news of devastating global climate change might seem a bit of a bummer. Then I read an LA Times article and had a change of heart. The article began with the usual gloom. Greenland’s ice cap is melting. Our coasts will flood from rising seawater. Inuit hunters are falling through thinning ice. Melting glaciers change ocean temperature and salinity contorting the jet stream, which results in altered weather patterns worldwide. Multitudes of species are dying off . . . It was disheartening.

Then I got to the article’s final paragraph. Bam! My faith was restored. Here the Times pointed out the perks of global warming. Seriously, the article actually ended saying: « The report is not all gloomy. A warmer Arctic could increase the number of some species, such as Arctic char, a fish. It could extend the growing season for wheat in Canada and open up now-treacherous sea routes, such as the Northwest Passage and the Northern Sea Route, which parallels Russia, for shipping and resource exploration. »

Three cheers for the LA Times! It’s true! All is not gloomy. With that glorious bit of sunshine pumped straight up my ski bibs, I was able to see things in a whole new light. I started thinking of other advantages to global warming. Soon you will agree that people from all walks of life will benefit.
For starters, Inuit Hunters will benefit! Once Inuit have nothing left to hunt there will be no need for them to risk falling through thin ice. Plus, by needing food they will be ripe for a floating (pontoons, not ice) Arctic Super Wal-Mart. « Go get ’em, Sam. »

Boat owners will benefit! Not only will there be smooth sailing through the formerly bothersome ice of the Northwest Passage, but each summer, cruise ships will be able to run tourists straight up Bourbon Street in New Orleans.
Scuba Divers will benefit! There will be no more burning coral cuts. In fact there will be no more coral. Once all the reefs are gone, divers can pack away first aid kits and dive straight in. A little silt never cut anyone.

Canadian Wheat Farmers will benefit! You see, there is a 10% decrease in yield of corn from Midwest crops for every degree of global warming. No worries though, now wheat can take the place of corn. Think about all those scrumptious Wheat Dogs at the ball game. How about popped wheat with butter at the movies or steaming wheat on the cob? All scream ‘yummy’ to me.

While it is a bit ironic that ethanol is made from the corn crops global warming devastates, I am sure some aspiring chemist will rise to the challenge of developing ‘Wheatanol.’ Imagine Canuck Wheat Farmers having more influence than the Saudi Royal Family.

Dune-Buggy enthusiasts will benefit! The Dakotas will soon reopen for your 4-wheelin’ pleasure. Join the Mount Rushmore Nose Climb on July 4th! It will be a bugger of a challenge!

Eco-Tourism Operators will benefit! Companies could offer new « Emaciation Tour Packages. » Tourists get closer photos of polar bears and whales when they are too lethargic from starvation to meander away. In addition, long treks to Inuit villages can be avoided once they are forced to beg on the streets of Nome (or cashiering at Wal-Mart).

Finally, the next generation of Bush family politicians will benefit! Once again they can avoid addressing campaign issues, this time by distracting dehydrated voters with witty campaign phrases like; « No Kyoto Pact-No Ice Pack, » or « Dead Seals Never Flip-Flop, » even promising « No Char Left Behind. » Not to mention offering new, SPF 800 tax credits.

Well, by golly, I do feel better! Shall we spin the Rolette wheel some more?

Find tips about white lily flower and rubrum lily at the Types Of Lilies website.