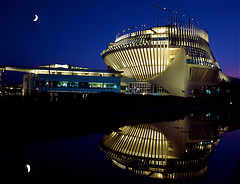 Visiting Macao, you can not ignore the Venetian, the most luxury and splendid hotel in Asia with dreaming ancient beauty. The Venetian Macao is owned by the Las Vegas Sands Corporation. The main hotel tower was finished in July 2007, and the resort was officially opened on August 28 2007. This 40-storey hotel is also the world’s largest casino with an area of 51,000 m2 including 3,400 slots, 800 gambling games, and a 15,000 seat arena for entertainment or sports events. It is divided into four gaming areas: Golden Fish, Imperial House, Red Dragon and Phoenix. Have a look at the world’s largest casino through following photos.

The main hotel tower was finished in July 2007 and the resort officially opened on August 28th, 2007

The Venetian Macao is owned by the Las Vegas Sands Corporation.

The Venetian Macao is a luxury hotel and casino resort

The casino opens 24 hours a day

The largest casino with 3400 slot machines and 800 gambling tables

The gaming area is divided into individual private gaming rooms

The Hebrides – Heaven Islands in the Atlantic Ocean

My favorite is traveling. I love to write about beautiful destinations and tourism events.