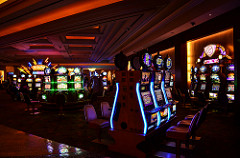 It intrigues me that original type « slider » silver dollars are considered by professional graders and most coin collectors to be circulated coins. It seems to me that the term slider has taken on a broader meaning than first intended.

The term slider originated as a mint state collector coin that was placed in a narrow height wooden drawer which had holes bored into it for the purpose of holding a collector’s coins. There was a slight amount of extra space where the coin could wiggle as the drawer was opened and closed.

Traces of abrasion on the coin wore off slight amounts of mint luster. The fact that there was some surface wear on the coin made it no longer in mint state condition. Thus the word slider was « coined » to describe this phenomenon.

I fully agree that these traces of wear on the face of the silver dollar constitute a condition which isn’t how it arrived from the mint. However, I take exception to calling it circulated. This obviously isn’t circulation wear, because the coin was never circulated.

I think referring to a slider as circulated is doing it a gross injustice. I think slider coins should have their own grading category, even if it is called « slider ». These orphan coins don’t belong in the Mint State category, and neither do they belong in the circulated category.

If these coins can’t have their own grading category, I think they should be called « mint state » with a note regarding the trace amount of slide wear on the coin. Slide wear doesn’t look like circulation wear, even in minor amounts, yet the coin is relegated to circulated when it comes to grading.

These coins have the reputation as being « passed off » by unscrupulous coin dealers as mint state. Are they really cheating a buyer by saying they’re mint state? After all, they are mint state coins with the slightest high point rub marks, not handling wear acquired during business transactions.

The rub marks on these coins originate from wood cases of past times, and coin flips in more modern times. Their wear results from ignorance of their collectors, past and present, not the result of carelessness from a commercial transaction, or casino use. Am I totally missing something here?

To discover more about coins: collecting issues, money management, investing in the rare and bullion coin market, and much more, I invite you to visit http://www.heritagecoingallery.com for videos and free tips on buying coins at the best prices.