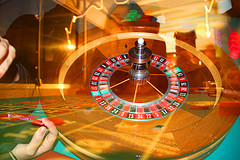 I don’t know the origins of the « game » Russian Roulette, but I have a feeling that the country named must have significance. Greek Roulette or British Roulette doesn’t seem to have the same overtone. In this instance Russian Roulette seems to fit with the recent events in Georgia. Trying to work out the actual facts of who blinked first and set off the chain of events is probably not a particularly useful exercise. What seems more fascinating is how certain countries seem to find it harder to embrace western democracy than others. Now I realise this sounds like dangerous territory entering the arena of politics, however I am posing a question from the viewpoint of human nature and security.

Vertical and social systems that human beings have used to organise ourselves by have been many and varied. It seems curious that there is an implicit stance expressed in the West that assumes our form of democracy is not only the best form of governance but how could anybody else possibly question its supremacy? The truth is if you look at broad groupings of people some cultures seem more at ease with a democratic model than others. It’s always appeared interesting to me that from my simplistic understanding of Chinese history strong supreme and centralised governance – from the first Emperor who unified that great country right the way through all the dynasties – is what the people became used to, there was nothing else to compare it to, it was the norm. The irony is that this all-powerful feudal dictatorship was replaced by Communism but with structures and leadership that seemed to be (at least to a western eye) almost exactly the same as the emperor styled governance that went before.

It has also struck me as curious that many societies in Africa and in the Arab world have been based on a tribal order of strong leaders for direction and justice. Often when these societies were colonised and then carved up into often falsely contrived countries in the post-colonial order of things, democracy often struggles to take root.

Likewise with Russia, a powerful empire with Tsars that had absolute power, where democracy didn’t challenge the monarchy as in other western countries and like China was swept aside with social ideals, but in most cases since 1917 dictatorship has been the norm to varying degrees.

So the question is, do some societies feel more secure with strong centralised leadership with all its drawbacks rather than democracy, particularly if it is combined with bland personalities?

Russia seems to be going through a collective tussle within its soul, on the one hand the open market with its economic prosperity has replaced the empty shelves but they seem to love the powerful leaders who can exercise control on their neighbours as well as within their society.

Perhaps some people feel safer when governed with a strong fist. There are many companies with famously autocratic leaders that never seem short of people who work for them but will mankind ever feel universally secure without the sense of threat to guard against, be it real or in many cases imagined?